This is the first in a series looking at the status of each position before the Bills open training camp July 24. This installment: Quarterbacks.

This is quite straightforward. The Buffalo Bills have their quarterback room firmly set, and they have their star in Josh Allen.

Allen is coming off a year when he threw for 4,407 yards with 36 touchdowns and 15 interceptions. He ran for another 763 yards, a career high, and six touchdowns on 122 carries. He’s unlocked and sustained an incredibly high level of play.

The quarterback room has morphed greatly since last season ended, but with Allen the center of all orbits. 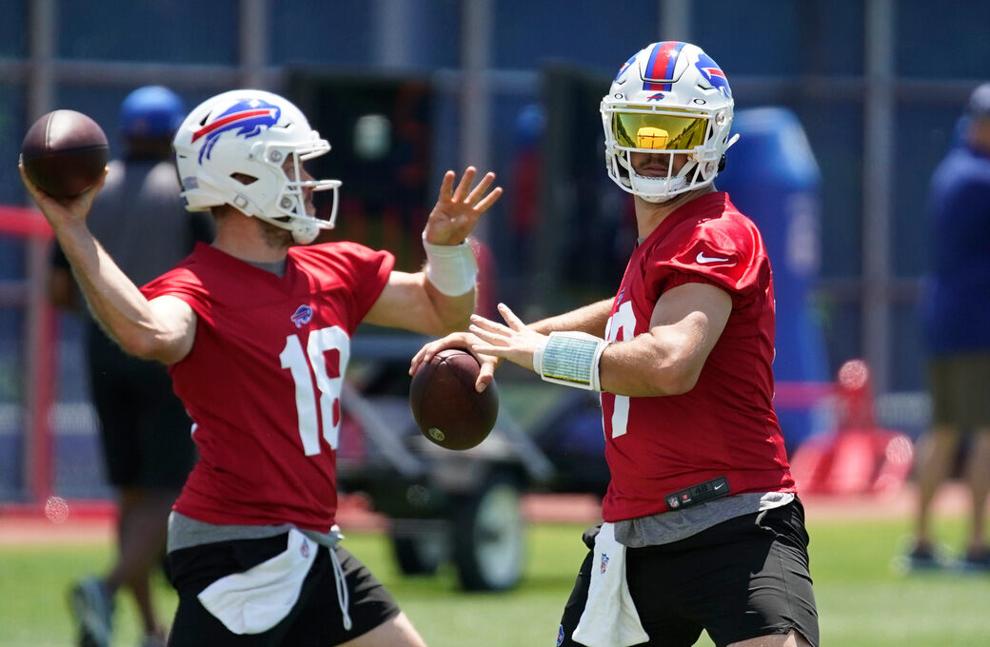 The other quarterbacks in the room have all changed, though Matt Barkley is reviving his role after a year away. The coaches have shifted as well, and Allen will play his first season without Brian Daboll as offensive coordinator. It helps that Ken Dorsey got Allen’s nod for the promotion after three years as quarterbacks coach.

General Manager Brandon Beane and coach Sean McDermott have emphasized continuity in every sense, even while knowing eventually players and coaches would be pulled away. Allen has reaped the benefits.

“I think the continuity in the quarterback room is very important to how guys play,” Allen said. “And guys that you can trust, feed different ideas off of, guys that have been around the league and in different systems and know different concepts, it’s very helpful. It’s very impactful for a game.”

It’s not a crutch for Allen, but it is a luxury. The team wants to give him every advantage it can, and they’ve been able to bring in quarterbacks with plenty of game experience. With Mitchell Trubisky now with the Steelers, Case Keenum slides into the role of veteran backup.

Allen has already said he’s been able to pick Keenum’s brain to ask what he’s seeing on certain plays. And Allen and Barkley are extremely close. The season is grueling, and having a tight-knit room helps.

Plus, some fresh perspectives can be good. Allen has noted all the stops that new quarterbacks coach Joe Brady has made and how that can help.

“He brings a lot of juice,” Allen said. “He’s been great in meetings so far. He’s got a lot of knowledge of the game. He’s been in a lot of different places with some really good quarterbacks.”

Departures: Mitchell Trubisky, Davis Webb, Jake Fromm (who was signed of the practice squad in midseason).

Key number: Six. Allen has had six or more rushing touchdowns in each of his four seasons, the first quarterback to do so. There’s always a balance of letting him play his game without risking injury.

Top position battle: Allen likes to race the other quarterbacks, and this tradition is continuing without Davis Webb, so watch for some battles to the finish line at practice. Outside of that, Barkley could make a push for a larger role, but he likely will be on the Bills’ practice squad.

Barkley’s familiarity with the team could give him a leg up over Keenum very early on, but with Dorsey’s tweaks to the offense and with Keenum’s experience, it’s an uphill battle.

It’s most likely that the Bills will keep two quarterbacks on the active roster – as they generally have outside of 2020 when Covid precautions played a larger role – so it will be hard for Barkley to crack the 53-man roster. Still, the Bills clearly value what he can bring to the room, and he’s thrilled to be back.

What to expect: Allen will start, shine, scramble and sling it. Keenum will be ready if anything happens. Barkley will round out the room. Everyone will play golf.