Ground was broken for the new stadium in mid-1996, shortly after the arrival of the Ravens. The team played its first two years at Memorial Stadium. Although there was some sentiment from Baltimore residents in having the Ravens stay there permanently, it was deemed too old to host an NFL team. (The Orioles moved away from Memorial Stadium after the 1991 season.)

The stadium site was previously the site of the Wm. Knabe & Co. piano factory, which closed during The Great Depression. A sidewalk keyboard mosaic on the southwest corner of the stadium honors the company’s legacy.

In 2003, M&T Bank acquired naming rights to the stadium. The bank had recently entered the Baltimore market with its purchase of Allfirst Bank. Two other companies were in the running to be granted naming rights to the stadium; they were reportedly Nextel and CarMax. Following the September 2002 death of Baltimore Colts quarterback Johnny Unitas, public sentiment leaned toward renaming the then-sponsorless stadium after the Baltimore icon. However, the Ravens and the Maryland Stadium Authority held firm in their right to negotiate naming rights fees. In the end, the plaza in front of the main entrance to the Ravens’ stadium was named “Unitas Plaza”, complete with a bronze statue of the Hall of Famer. The plaza formerly featured large banners, each containing a picture of Unitas in his playing days, flanking the stadium entrance. After 10 years, these were replaced by large metal 19s (Unitas’ number) for the 2012 season. In 2014, the Ravens unveiled a new statue of long-time Raven Ray Lewis next to Unitas’ statue. The bronze figure depicts Lewis in the final pose of his iconic “squirrel dance”, which he would perform before every Ravens home game upon coming on to the field.

The venue is served by the Hamburg Street station of the Baltimore Light Rail.

North-end view during the Ravens’ Super Bowl XLVII run in 2013. The stadium is lighted in purple LED every Ravens postseason.

The stadium originally featured a natural grass surface. However, an artificial surface, Sportexe Momentum Turf, was installed for the 2003 season, which in turn was replaced by a new-generation Sportexe Momentum 51 in 2010. On December 4, 2015, the Ravens announced that in 2016 the team will go back to natural grass playing surface.[10]

The Ravens are the stadium’s primary tenants. On December 7, 2008, an M&T Bank Stadium then-record crowd of 71,438 watched the Baltimore Ravens defeat the Washington Redskins 24-10 on Sunday Night Football, only to be surpassed the next week when the Pittsburgh Steelers defeated the Ravens 13–9 in front of 71,502.[11] On January 15, 2012, a record crowd of 71,547, the largest in Ravens history,[12] was in attendance at the 2011 Divisional Playoff Game in Baltimore against the Houston Texans, which the Ravens won 20–13.

In 2013, the annual rivalry between Maryland and West Virginia was held at the stadium.[15]

In 2022, Notre Dame and Navy are set to play once again at the stadium

The Maryland Public Secondary Schools Athletic Association (MPSSAA) held the four state football championships for Maryland’s public high schools at M&T Bank Stadium until 2016. Two Baltimore high school football rivalry games have been held at the stadium in November. Baltimore City College plays Baltimore Polytechnic Institute every November, in one of the oldest high school football rivalries in the United States. Every Thanksgiving, Loyola Blakefield and Calvert Hall College also square off in what has now been called for many years as the Turkey Bowl, usually reaching up to 13,000 people in the audience.[17] Both games were once played back-to-back on Thanksgiving Day at Memorial Stadium. However, when City College and Polytechnic joined the MPSSAA before 1994 season, the game was forced to be played in early November, due to MPSSAA rules and playoff schedule. 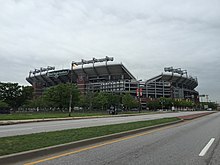 View of the stadium from Russell Street 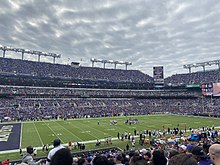 The stadium serves as an alternate venue for the Johns Hopkins University men’s lacrosse team, and was the site of the semifinals and final of the NCAA Division I Men’s Lacrosse Championship in 2003, 2004, 2007, 2010, 2011, and 2014. Major League Lacrosse‘s Baltimore Bayhawks used the stadium as their home during the 2002 season. 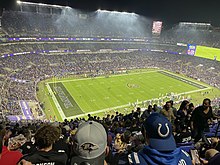 M&T Bank Stadium at night during a Monday Night Football game against the Indianapolis Colts on October 11, 2021

Monster Jam was held at the stadium for the first time in 2011, and the stadium has been announced to become a normal stop on the summer tour. Monster Jam returned for the third time on June 8, 2013.

It served as Nextel Stadium, the home field for the fictional Washington Sentinels in the 2000 film The Replacements.[24] The stadium was also supposed to be the location of the football game in the 2002 film The Sum of All Fears and included footage of the presidential motorcade going to the building. However, the stadium used for the aerial shots is the domed Olympic Stadium in Montreal, while the book used Denver as the locale for the attack.[25]

It was featured in “Stadium,” a 2013 television public service announcement which was part of the “I Want To Be Recycled” advertising campaign for Keep America Beautiful and the Ad Council. The stadium is partially constructed from post-consumer recycled aluminum.[26][27]

On February 25th, 2021, M&T Bank Stadium became the third mass vaccination site in the state of Maryland, inoculating residents against COVID-19. It is a public-private partnership between the Maryland Air National Guard and the University of Maryland Medical System and has the capacity to do up to 6,000-10,000 vaccinations a day, supply notwithstanding.[28][29]