Lincoln Financial Field, also known as simply “The Linc”, is an American football stadium located in Philadelphia, Pennsylvania, United States. It serves as the home stadium of the Philadelphia Eagles of the National Football League (NFL) and the Temple Owls football team of Temple University. It is located in South Philadelphia on Pattison Avenue between 11th and South Darien streets, also alongside I-95 as part of the South Philadelphia Sports Complex. It has a seating capacity of 69,796.

The stadium opened on August 3, 2003 after two years of construction that began on May 7, 2001, replacing Veterans Stadium. While total seating capacity is similar to that of “The Vet”, the new stadium contains double the number of luxury and wheelchair-accessible seats, along with more modern services. The field’s construction included several light emitting diode (LED) video displays, as well as more than 624 feet (190 m) of LED ribbon boards.[4]

Naming rights were sold in June 2002 to the Lincoln Financial Group, for a sum of $139.6 million over 21 years. Together, the City of Philadelphia and the State of Pennsylvania contributed approximately $188 million to the stadium construction.[5] Additional construction funding was raised from the sale of Stadium Builder’s Licenses to Eagles season ticket holders.

The Army–Navy football game is frequently played at the stadium due to Philadelphia being located halfway between both service academies, the stadium being able to house the large crowds in attendance, and the historic nature of the city. Temple University‘s Division I college football team also plays their home games at Lincoln Financial Field, paying the Eagles $3 million a year to do so as of February 2020.[6] The Philadelphia Union of Major League Soccer have played exhibition games here against high-profile international clubs when their stadium Subaru Park does not provide adequate seating. The stadium also plays host to several soccer games each year. It has also played host to the NCAA lacrosse national championship four times, in 2005, 2006, 2013, and 2019 respectively.

The design of the stadium is meant to evoke the team’s namesake eagle with wing like canopies above the east and west stands and the “Eagle’s Nest” balcony beyond the north end-zone. The team’s primary eagle logo is patterned in the dark green seats of the upper deck of the east and west stands. Three open corners of the stadium provide fans with views of the Philadelphia skyline and the field. The exterior of the stadium uses a brick façade to reference the historic brick architecture present throughout Philadelphia, while the exposed steel structure evokes the city’s bridges and future.[7]

In late spring 2013, the Eagles announced that there would be some major upgrades to Lincoln Financial Field over the next two years. The total project estimate was valued at over $125 million. The upgrades included seating expansion, two new HD video boards, upgraded amenities, WiFi, and two new connecting bridges for upper levels. These upgrades were decided upon after research from season ticket holders, advisory boards, and fan focus groups. The majority of these changes, including WiFi (which would accommodate 45,000 users and have coverage over the entire stadium), were completed by the 2013 home opener. The upgraded sound systems and video boards were finished for the 2014 season.[8]

Lincoln Financial Field from I-95, before addition of solar panels to exterior.

There are 2 exclusive 40,000 sq ft (3,700 m2) club lounges in the stadium. The lounge on the west side is the “Hyundai Club” and the one on the east side is the “Tork Club”. Suite holders and club seat holders have access to these 2 lounges. There are a total of 10,828 club seats in the stadium. These club seats feature some unique benefits above and beyond the lounges. One major benefit is the lounges open hours before the event, in most cases 2–4 hours. The lounges also have multiple full-service bars in them. The seats in the club level are padded, and there is also a wait staff present to serve food and drinks.[9]

There are numerous parking lots surrounding Lincoln Financial Field. The parking assignments may change depending on other activities in the area on a particular day. According to the stadium’s website, all lots will cost visitors $40 and $80 for an oversized vehicle. Tailgating is allowed in all lots except for T-X lots. The majority of the lots are public cash lots, but visitors should visit the website Lincoln Financial Field Parking for more information before heading to an event.[10]

The Eagles decided after the 2012 season to move training camp back to Philadelphia. As a part of this new agreement the Eagles will have multiple practices, which are open to the public, at Lincoln Financial Field. The rest of the practices will be closed, and will take place across the street at the NovaCare Complex. Information about tickets and dates can be found at Training Camp Information.[16]

Lincoln Financial Field before a Temple Owls football game in 2011.

Lincoln Financial Field is the home field for Temple University football. On August 13, 2003, the Philadelphia Eagles and Temple University announced a 15-year agreement for Temple to play their home football games at Lincoln Financial Field.[17] Temple played its first game at the Linc on September 6, 2003 against Villanova, the teams’ first meeting since 1980. During the 2015 season, the Temple Owls sold out the Linc on two occasions. The September 5 season opener against Penn State, and again on October 31 in a prime time matchup against Notre Dame. With its capacity of 69,796, it is the largest stadium in the American Athletic Conference.

Lincoln Financial Field is one of only five stadiums to be the home of both an NFL and college team, with the other four being Allegiant Stadium in Las Vegas (Raiders and UNLV), Hard Rock Stadium in Miami (Dolphins and Hurricanes), Heinz Field in Pittsburgh (Steelers and Panthers), and Raymond James Stadium in Tampa (Buccaneers and South Florida). 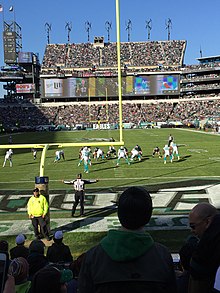 Lincoln Financial Field during week 10 of the 2015 NFL Season featuring the Miami Dolphins against the Philadelphia Eagles.

In 2004, after winning the gold-medal in soccer at the 2004 Summer Olympics, the U.S. women’s team conducted a “Fan Celebration Tour”, playing ten matches across the United States from September to December 2004. The matches were the final national team appearances for Mia Hamm, Joy Fawcett, and Julie Foudy, all of whom retired after the tour. The team played at the Linc on November 6, 2004 where they lost 3–1 to Denmark in front of 14,812 spectators.[20]

On July 18, 2009, Lincoln Financial Field hosted a doubleheader quarterfinal for the 2009 CONCACAF Gold Cup. The first game was between Canada and Honduras, and the second between USA and Panama. This was the first full international appearance for the United States national soccer team in Philadelphia since a 1968 friendly against Israel at Temple Stadium.[22]

Lincoln Financial Field was listed by U.S. Soccer’s World Cup bid committee as one of 18 stadiums to be potential sites for the United States to host the 2022 FIFA World Cup.[23][24][25]

The Linc was also the first home of the Philadelphia Union early in 2010. The Union played their home opener against D.C. United at the Linc on April 10, 2010 due to construction delays at their new stadium, PPL Park (now Subaru Park). The Union defeated United, 3–2. The Union also played FC Dallas to a 1–1 tie in the second home game in franchise history at the Linc. After moving to their permanent venue in Chester, the Philadelphia Union continued to use the Linc for matches where ticket demand is expected to far exceed the full capacity at its regular home until 2011.[citation needed] English powerhouse club Manchester United met the Philadelphia Union during their pre-season tour on July 21, 2010 where they lost 1–0.[26] The Union played the Spanish powerhouse club Real Madrid on July 24, 2011, where they lost 2–1.[27]

The US men’s national team returned to Lincoln Financial Field on August 10, 2011, for an international friendly match against Mexico, where they tied 1-1.[29]

In 2012, the stadium hosted a World Football Challenge match between Real Madrid and Celtic F.C. with Real Madrid winning 2–0.[30]

On August 2, 2014, Lincoln Financial Field hosted a soccer match between A.S. Roma and Inter Milan which was part of the 2014 International Champions Cup. Inter Milan won the match 2–0.[31]

In 2016, the stadium hosted games in the Copa América Centenario.

On August 29, 2019, the Linc hosted the US Women’s National Team in the second match of their victory tour in a game against Portugal. The match set the record for the highest attendance for the team in a friendly match, attracting 49,504 fans. The United States won 4–0.[34]

Lincoln Financial Field will host matches during the 2026 FIFA World Cup, making it one of the eleven selected US venues.

Panorama of the U.S. National Soccer Team playing the National Team of Turkey on May 29, 2010 as part of the 2010 World Cup send-off series

The Philadelphia Phillies celebrated their 2008 World Series championship with a parade down Broad Street, appearance before a sold-out crowd at the Linc, and then a ceremony at Citizens Bank Park. The Citizens Bank Park ceremony was simulcast to the crowd at the Linc.[36] Tickets to the event at Lincoln Financial Field were made available at no cost to the public and were gone within 45 minutes when they were made available at 3pm on October 30, 2008.[37]

Monster Jam performed at the stadium from 2010 to 2012 as part of the summer stadium tour. After a six-year absence, Monster Jam returned to the stadium on May 5, 2018. Previous events took place during the winter at the Spectrum and the Wells Fargo Center from 2013 to 2015.

On February 23, 2019, the Philadelphia Flyers defeated the Pittsburgh Penguins 4–3 in overtime in the 2019 NHL Stadium Series in front of a crowd of 69,620, the largest record attendance for a hockey game in Pennsylvania.

The Philadelphia Eagles are expected to play in Lincoln Financial Field until the 2032 NFL Season.

The stadium is prominently featured in the opening of the TV show It’s Always Sunny in Philadelphia. It also features in the third episode of season 3 of the show.

In 2013, Lincoln Financial Field was considered one of the “greenest” NFL stadiums.[54] Energy-efficient additions include 11,000 solar panels, and 14 UGE-4K wind turbines outside and on top of the stadium respectively. These installations account for 30% of the electricity used to run the facility. 2013 also marked the fourth year in a row that the venue made the top of PETA‘s list of “Vegetarian-Friendly NFL Stadiums”.[55]